Mad About Hats and Gin 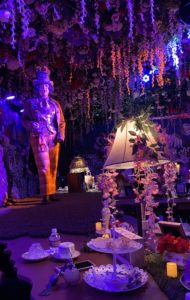 After more than two years of lock-down, for those who celebrate Easter or Passover, this spring was a welcome shift in celebratory festivities. Traditional values dictate the ceremonial hiding and seeking of decorative eggs, baked ham, Sunday best at church, and if you live in my house: Peeps ™.

I wanted to do something a bit different this year. Going solo, purposely, this year I chose an offbeat, not-in-my-wheelhouse, just-what-in-the-hell-is-this, kind of celebration. About once a year, I select at least one crazy, not-really-on-my-radar event.  Often, I drag my eldest child, my son, with me, but this time I let him off the hook because I wanted to do this on my own.

Secret Dallas, an event organizer agency, curated a special Gin and Tea Party, hosted by none other than the Mad Hatter. Held at an undisclosed location, announced just days ahead of the event, attendees arrive dressed in their Mad Hatter attire, ready to slide down the rabbit hole for a twisted good time with a side order of gin.

The event offered tea party guests a variety of (mad) party hats to compliment their costumes. I, however, arrived fully equipped with my own mad hatter chapeau — because I have a hat phobia…if it’s not mine, it doesn’t touch my head.  (Sorry, not sorry.)

An adult version of the childhood classic, the event was filled with impressive swearing, singing and dancing, and a room filled with laughter (did I mention the gin?). The sponsoring (chosen) tasty tea was Drumshanbo Gunpowder Irish Gin.

Starting with a short shot to shrink us down to acceptable size, partygoers enjoyed a strawberry gin elixir that melted the heart while warming the belly. As we headed down the bunny trail to Hatter’s house, a garden sprawled across the walls, ceiling, and stairwell.

Tables were adorned with traditional tea party décor: lamps, teapots, and picture frames (empty of course — Hatter’s rules!). When I said traditional, I should have said “MAD” tradition.

The artists acted out (rude and vocally lewd) scripted dialogue as they insulted us (and each other) for being present. It was deliciously hilarious and delectably scrumptious. ] Each (gin) tonic, fused with a flavorful sidekick, was paired with a savory snack. The spicy kernel corn was a smashing hit at my table!

After ninety minutes of nonstop laughter (and gin), it was time to return to reality. Illusive delusion is fun, but eventually everyone must go back from whence they came. On my way home, I thought about how much I enjoy getting out to do random off-the-wall things on my own. I met new friends, tried new (favorite) concoctions, and got a chance to resurrect one of my beloved costume characters. It was totally worth a kitchen pass for traditional Easter dinner. My favorite colorful sugary chicks did not get one. 🐣

Every girl needs to get out and act out of character now and then, especially when hats and gin are involved.